View From The Hamster Wheel 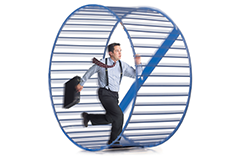 One of the most consistent points raised during discussions with clients about new initiatives to improve branch operations, is that they are so buried under tasks already on their plate that there is no chance anything new can be considered. It doesn't particularly matter what the idea is, or what the costs are, or even what the potential benefit is. Through the blur of the spinning wheel of day-to-day activity, nothing can be brought into focus unless it is already active.

What Gets In the Way?

There are many factors that feed into this condition, and most of them push towards staying with whatever already exists inside the wheel.

With all of these forces creating resistance to evolutionary change, how does an organization move forward? Several things can be done to alter the landscape.

The first step in effecting change is to take a deep breath and look around.

Considering each of these questions stops the wheel, even if only for a few minutes. What may be surprising is how much perspective can change in a short period. Once a vision is in place planning and implementation can start, even if it is on a long track.

Scheduling branch staff today presents challenges that did not exist a few years ago.

How Much Branch Time Is Wasted?

For many financial institutions this is a rhetorical question, because they have no idea.

With the changing landscape and new technologies in branch operations, teller performance measurement is more important than ever . . .